Snooker cues have smaller tips, brass ferrules, and are made with dense ash wood. It’s possible to play pool with a snooker cue, but many players find that they sacrifice some cue ball control and power when doing so. That said, it’s mostly a matter of player preference, feel, and style of play.

Read on to discover the potential benefits and pitfalls of playing pool with a snooker cue.

Although snooker and pool both fall under the umbrella term “billiards,” they are very different sports. As such, they require different cues. Here are how snooker cues differ from pool cues.

Snooker cues have smaller tips than pool cues. Common snooker cue sizes are 9mm or 10.5mm, whereas pool cues have 12mm and 13mm tips. This is because snooker is played on a larger table and with smaller, lighter balls. The smaller tips help with accuracy but allow for less spin-control.

Snooker cues are also lighter than pool cues. Snooker cues typically weigh between 16 and 18oz. Pool cues, on the other hand, weigh between 19 and 21oz. The reason for this has a lot to do with the size and weight of the balls in each game.

The balance of the weight for each cue is different, as well. Pool cues hold most of the weight on the butt, whereas snooker cues have more weight up front, near the tip.

Most commonly, snooker cues are made from ash wood. Pool cues are usually made from hard rock maple. So, if you play pool with an ash snooker cue for long enough, the chances of the shaft cracking are greater. The smaller overall density and size of the snooker shaft won’t hold up as well as pool cues, which are designed with the larger, heavier balls in mind.

But, snooker cues are also made with hard brass ferrules, which makes for a stiffer shaft. This, combined with the weight of the shaft and the smaller tip, makes “squirt” or deflection more apparent. 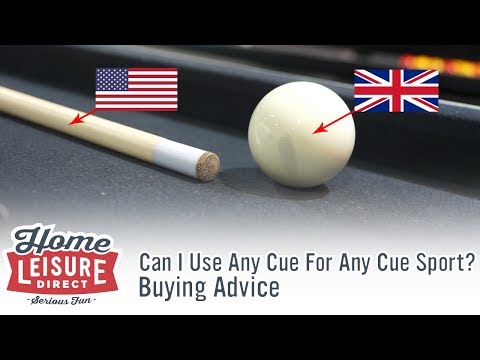 Now that I’ve gone over the differences between snooker and pool cues, it’s important to say that the type of pool you’re playing matters.

Most players wouldn’t notice a difference in playing English pool and Snooker with the same cue. But, since American pool has larger, heavier balls, a snooker cue would present more problems for many players.

What Playing Pool With a Snooker Cue is Like

Snooker tables are large (12’ x 6’) and they have rounded pockets. This means that accuracy is king in the game of snooker. And snooker cues are designed to reflect that fact.

So, when playing pool with a snooker cue, you can reasonably expect some issues, like unwanted squirt, more miscueing, less cue ball control, a significant difference in “feel,” and less power. However, you’ll also probably experience more accuracy on straight or bank shots.

Since the tips of snooker cues are smaller than pool cues, your chances of unwanted squirt and miscueing increase. You need to be more precise when striking the cue ball with a snooker cue than you otherwise would with a pool cue. There’s less surface area on a snooker tip, which makes inaccurate shots more apparent.

One of the essentials for getting good at pool is cue ball control. You can use spin or English to place the cue ball where you want it after each shot. But this is much harder to do with a snooker cue. Again, this is due to the smaller cue tip, the stiff shaft, and the lighter overall weight of the cue.

A Difference in Feel

If you’re used to playing pool with a pool cue, you’ll definitely notice a difference in feel if you play with a snooker cue. Even if your game isn’t necessarily affected one way or the other, you’ll still notice the feel of the lighter cue that holds more of its weight near the tip.

The stiff ferrule and shaft are also big factors in the feel. Some players say that striking a cue ball with a snooker cue feels “wrong.” Obviously, this is something you could get used to if you played with a snooker cue enough, but many players don’t get past the initial “wrong” feeling.

Although snooker cues have a stiffer shaft, their lighter overall weight makes them less powerful when playing with heavy pool balls. Many players insist that they don’t get the same amount of power they need, like on a break shot, with a snooker cue.

One positive you can experience when playing pool with a snooker cue is more accuracy. But not on every shot. Shots that require English are harder to perform with a snooker cue. Straight shots tend to be easier, though. For this reason alone, many snooker players stick with the snooker cues to play pool, if their skill level allows it.

When it comes down to it, you can definitely use a snooker cue to play pool. Most of the items on this list aren’t deal-breakers. You can learn to play pool with a snooker cue, and play very well. Some pro players even do this.

But, if you’ve been playing pool with a pool cue for years and you want to switch to a snooker cue, it’s going to take some doing and probably isn’t worth it. On the other hand, if you’re just learning to play pool, you can try playing with both a snooker cue and a pool cue to see which one works best for you.