At a glance, pool and snooker cues look very similar. They both have the same basic function, which is to strike a cue ball into an object ball. However, the small but significant differences between the games of pool and snooker dictate that the cues aren’t identical in every way. So, in this article I aim to answer the question: Are pool cues and snooker cues different?

As mentioned above, the differences between pool and snooker cues are apparent if you know what you’re looking for. But for those who aren’t familiar with pool or snooker, the differences may not seem like such a big deal. However, when it comes to gameplay, these two cues make a huge difference in their respective sports.

Playing snooker with a pool cue or pool with a snooker cue would add a whole new challenge to the game. This is because both cues are made to play as well as possible based on the requirements and the balls used in each game. So, let’s take a look at the differences starting with the weight of the cues.

Snooker cues are generally lighter than pool cues. Snooker balls are slightly smaller than pool balls, and they also weigh less. A lighter ball means you need a lighter cue for accuracy and finesse.

Snooker and pool cues are also made of different materials. Pool cues are made mostly from hard rock maple because it is a nice mixture of strength, flexibility, and durability. Since pool balls are heavier than snooker balls, pool cues require more of a solid, dense wood like maple.

Ash, on the other hand, is the most popular wood for snooker cues and English pool cues. Ash isn’t as dense as maple, making it ideal for snooker, where accuracy and control are vitally important. Ash wood also has a more pronounced grain pattern than maple. Some snooker players use the visible grain in their ash cue as a way to line up their shots and see how their cue is shooting.

The size of the tips for each kind of cue is a big difference, even if it doesn’t seem so at a glance. Snooker is a game played on a large table (12’ by 6’) with smaller balls and smaller pockets than pool. As such, the shots in snooker require a little more accuracy, which accounts for the size of the tips. A 9mm to 10.5mm tip allows for more accuracy, which is a big part of snooker. Also, the smaller and lighter balls used in snooker make these smaller tips a necessity.

On pool cues, the tips are generally 12mm or 13mm in size, although they can be found as large as 14mm. For the reasons snooker cue tips are small, the opposite is true for the larger pool cue tips. Larger, heavier balls make larger tips necessary.

Plus, pool is played on smaller tables, with tournament tables measuring 9’ by 4.5’. The pockets are pool tables are also larger and shaped differently than those on snooker tables. This means that, although accuracy and English are important in pool, they are considered a larger part of snooker. The big tips of pool cues sacrifice some accuracy for spin capabilities.

Now that we’ve talked tips, let’s talk about ferrules, which are found just behind the tip on cues. Ferrules are important because they provide stabilization and some shock absorption for every shot. They also allow for easier changing of tips and provide some protection for the wood. Without ferrules, cues would likely split and wear down faster after so many impacts with pool balls.

Snooker cues generally have brass ferrules. Pool cues usually have carbon fiber ferrules. While things are slowly changing for many snooker cues, brass is still the most common material. This is attributed to the fact that the brass holds up well and protects the relatively small end of the cue. Some snooker players also prefer the “feel” of playing with a brass ferrule, but this can easily be attributed to habit, familiarity, and style.

The carbon fiber or plastic tips on pool cues perform the same functions as a brass ferrule. They do have a different feel, but again, this is a player preference as any difference in actual play is likely negligible.

The last difference between pool and snooker cues lies in their design. Snooker cues are often made with wood butts. While the butt of a snooker cue will likely have some understated design, pool cues are usually more flashy.

American pool cues often have Irish linen wrapped around the butt for grip and aesthetics. Snooker cues don’t usually have any extra wrap or design around the butt. The same can be said for inlays, graphics, and other design extras often found on pool cues.

How the butt looks has no bearing on gameplay. However, those who are used to playing with a cue that has a wrap around the butt may not be comfortable with a cue that doesn’t have a wrap, or vice versa.

Now that we’ve covered all the differences, let’s take a look at the similarities. These include the length of cues, their overall build, and the tip materials they use.

Both snooker and pool cues are either 57” or 58” in length. Of course, there are smaller cues available out there, but these are the most common sizes used in both games.

Both snooker and pool cues use leather for their tips. Leather is ideal for billiards games because it’s tough enough to transfer power and yielding enough to give some ball control. 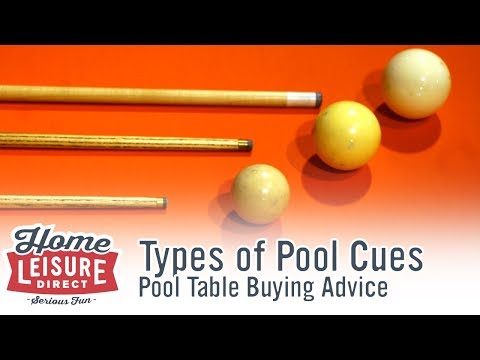 As you can see, both cues serve the same purpose and are essential to any billiards game. However, when you look closer you can see how many small differences they have. The reason for these differences comes down to the size of the respective tables and balls. Weight, ferrules, tip sizes, and materials can all affect gameplay. Both games require mastery of the cue in order to reach a professional level, but those skills are a little different for each game, just like the cues are.