Is Snooker Harder Than Pool? Snooker is often compared to other cue sports for different reasons. Invented in the late 19th century, snooker has been around for a while. It’s popular in Britain, whereas 8 and 9-ball are more popular in North America and Asia. Each game requires a similar skill set and reaching a professional level takes years of practice, determination, and skill. But none of this answers the question, Is snooker harder than pool?

Opinions vary, but most people consider snooker to be a more difficult game than “pool” as it is widely known. This is mainly attributed to the larger snooker table and the smaller size of the pockets. However, difficulty depends mainly on any given player’s ability and familiarity with the game.

Why Snooker is Considered Harder Than Pool

Many people consider snooker to be harder than regular 8 or 9-ball pool. And it’s not just snooker players saying this. But, there is no overall consensus. It’s one of those things where there seems to be just a slight majority in favor of snooker as the more challenging game. Here’s why.

When people talk about snooker over other billiard games, they mention table size without fail. Snooker tables are rather large at 12-feet by 6-feet for a full-size table (10’ by 5’ in America). For comparison, full-size regulation pool tables are 9-feet by 4.5 feet. This size difference tends to make mistakes more apparent in snooker. The farther the ball has to travel, the more precision is required for the shot.

This size also means that you need to have a large area to put a table in if you want one at home. Unless you have plenty of room to spare, chances are you’ll opt for a smaller snooker table or a smaller pool table. Either way, you’re not getting the experience of playing on a full-size table like those at the pro level do.

Ball size may have something to do with the perceived difficulty of snooker. While the balls of a standard pool set are 2 ¼” in diameter, snooker balls are 2 1/16”. This may not seem like much of a difference, but it does make a difference, especially if you’re used to playing with larger pool balls. You may think that the smaller ball size could make things easier, but the pockets of a snooker table are smaller, too.

If the pockets of a snooker table were the same size as those of a pool table, the smaller balls might be a slight advantage. But, since the pockets are smaller, too, there is no apparent advantage. Smaller balls, smaller packers, and a larger table characterize the game of snooker. 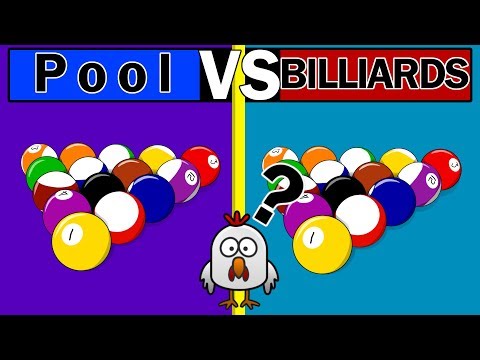 There’s no doubt that becoming great at any billiard game is very difficult. Some players may have a leg up in their grasp of a game. Or they may have played one game growing up over another. It’s like comparing hiking 100 miles in the desert to hiking 100 miles in snowy mountains. The distance is the same. The equipment is similar. And hiking is still hiking, no matter where you are in the world.

But, some people will say that hiking in the desert is harder, whereas others will say hiking in snowy mountains is the more difficult challenge. Really, it depends on who you ask and what their own experiences and skills have led them to believe.

Like the hiking analogy above, whether snooker is more difficult than pool depends on any given player’s skill level. Someone who has been playing on a 9-foot pool table for years will likely have difficulty adjusting to the larger snooker table as well as the slightly smaller pockets and balls.

The same could be said for a player who is used to playing on a large snooker table. The dimensions alone could make one game harder than the other.

For many pool players, especially those outside of England, snooker just isn’t a very accessible game. Since the tables are larger and it’s not as popular, many people simply don’t have the opportunity to play the game.

So, as you can imagine, those who have access to snooker and are able to play it often are likely to think that it’s an easier game. Whereas those that don’t are likely to consider that it’s harder. And, of course, we can’t forget about the ego. Many snooker and pool players will suggest that their game of choice is harder because it gives them a sense of fulfillment and bragging rights to do so.

Of course, mastering any type of billiard game (or anything, for that matter) is difficult. So, maybe both groups are right. This brings me to the last subject, which is player perception.

There really is no way to say one way or the other if snooker is more difficult. Maybe in a few years when we have AI robots, we can find a definitive answer. In the meantime, it is a matter of perception. No two humans have the exact same experiences and perceptions, so it’s not possible to say for sure whether one billiard game is more difficult than another. After all, humans are a big part of any billiard game.

That being said, it is possible to get a general consensus as to what people at large think is the more difficult game. Although this is far from an absolute truth, it is all we have to go on now. From what I’ve gathered, snooker is considered to be slightly harder than pool. But that consensus may change in the coming weeks or months. Who really knows? Crazier things have happened.

How Much Does it Cost to Move a Pool Table?

Is Billiards a Dying Sport?