What Are The Dots on a Pool Table For? If you’ve played pool for any length of time, you’ve probably noticed the dots or diamonds spaced out along the rails of every pool table. In the beginning, most of us assume they’re just for decoration or don’t give them much thought at all. But these dots do serve a purpose – one that nearly every advanced player is aware of. So, what are the dots on a pool table for?

The dots or diamonds on a pool table are there for two main reasons – to divide the table into distinct sections and to provide visual reference points for the geometry of certain shots. They are particularly useful for improving accuracy on bank shots and kick shots. However, the effective use of these markers depends on a given player’s understanding of how they work.

Before we delve into the nitty-gritty, let’s first establish some terminology to make things clearer and avoid confusion.

What Are the Dots On a Pool Table Called?

The dots or diamonds on a pool table’s rails are called “sights” – though they are often referred to collectively as “the diamond system.” Sights are not to be confused with “spots,” which are small circles on the playing surface used to mark important points, such as the starting position of the rack.

For this article, since dots, diamonds, and sights are the same thing, I’ll use the terms interchangeably.

It’s worth noting that most American pool tables use diamond-shaped sights while most snooker tables use circular “dot” sights. However, many pool tables use dots as well – it just depends on the brand and style of the table.

But, since snooker tables tend to be larger than pool tables and use different-sized balls, the geometry and physics will be a little different between the two games. For this article, in describing how to use sights to your advantage, I’ll assume we’re playing on an American pool table.

To better understand the purpose of the sights on a pool table (and how to use them), we first need to understand a few key concepts about pool table layout.

Pool tables have 18 sights in total, with 3 sights evenly spaced between each pocket. Some tables have a brand name or crest in place of the center sight on either the foot rail or the head rail. Each pocket can be counted as a sight in itself for practical purposes – but we’ll get to that a little later.

Visualizing these strings and the way they intersect on the table is a good starting point for understanding the proper use of the diamond system. In fact, to best utilize the diamond system, it helps to imagine the table as a grid with strings between each sight and its direct counterpart on the parallel rail.

How Do You Use the Dots On a Pool Table?

Using the dots (aka sights or the “diamond system”) on a pool table basically comes down to using each dot as a visual reference for lining up the angles of bank shots and kick shots. There are several methods for doing this, ranging from fairly simple to very advanced. Generally speaking, the more rails are involved, the more complicated the method is.

When you need to execute a bank or kick shot using multiple rails, the geometry becomes a little trickier, and using the diamond system begins to require more complicated calculations.

For now, we’ll start with the basics.

The best place to start when learning to use the dots on a pool table is to give each dot a number. Different players use all kinds of different numbering systems. Some people count by twos, some by tens, but for the sake of example, we’ll count by ones and use a fairly simple system. Here’s where we need to count each pocket as a dot, as well.

For instance, if you’re standing at the head of the table, you would start at the left corner pocket closest to you, numbering it 0. The next dot on the side rail is number 1, then 2, then 3, and so on to the foot of the table (the side pocket is counted as dot number 4). Do this with the head rail as well, from left to right (0 to 4). The numbers on these rails will be directly mirrored on their parallel rails – the right-hand side rail will also be numbered 0-8 from the head to the foot, and the foot rail will be numbered 0-4 from left to right.

Again, you can use any number system you prefer, and you may even use multiple systems for different circumstances. The main thing is to give our table a graph-style reference system that we can use to help set up our shots.

Now let’s look at how we put it into practice.

The 2-to-1 Aiming System

Probably the most basic (and therefore the least confusing) method for using the pool table’s diamonds is the 2-to-1 system. This is an application of the “mirrored-angle” principle, which states that a ball will rebound off of a rail at virtually the same angle at which it came in.

For example, if your cue ball is at diamond 2 and your intended object ball is at diamond 0 (corner pocket) on the same rail, you would kick the cue ball off of diamond 1 and let physics do the rest. In other words, the distance to the target is always twice as long on the near rail as it is on the far rail – hence the name, 2-to-1.

This method would also work if the cue ball were at diamond 0, with the object ball at diamond 4 (side pocket) along the same rail – you would simply halve the distance on the far rail and kick the cue ball off of diamond 2 on the opposite side. This also works for bank shots as well as shots along the length of the table (banking off of the short rails).

Of course, the cue ball and object balls aren’t always hanging out in line with the diamonds, but somewhere in between. For these shots, you’ll need to utilize imaginary diamonds. In our number system, it’s easiest to express these in tenths – 1.1, 1.2, 1.3, etc. It’s a little trickier, but the principle remains the same. You’ll just need to eyeball it to get as close as you can.

The 2-to-1 system becomes less accurate at longer distances (6 diamonds or so) but with a little aiming adjustment, you can still make it work. It’s also worth noting that this works best at moderate speed with no spin or English applied.

I’ve described the 2-to-1 system because it’s the simplest and most accessible example for beginners of how to use the dots or diamonds on a pool table. There are several other aiming systems and methods, but some of them are highly technical and to describe them in detail here would be beyond the scope of this article.

A few of the most common methods for more advanced shots include: 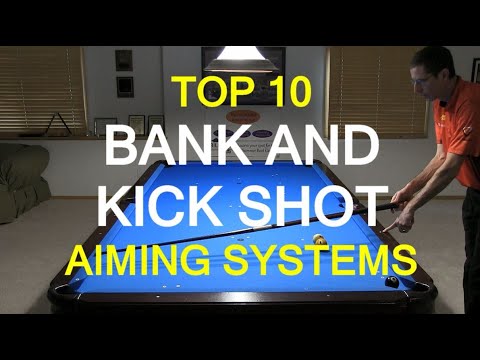 I hope this article helped illustrate how the dots (or diamonds) on a pool table can be used to help improve accuracy on bank shots and kicks. There’s truly an ocean of information on the subject of aiming systems – and if you’re looking to take your game to the next level, it’s worth diving into. It may be hard to wrap your head around at first, but with time and practice, seeing all the angles will become second nature.

Do You Get Two Shots on the 8 Ball?