What is a Pro Taper Pool Cue? If you’ve been looking to buy your own pool cue – or if you’ve just been spending time in pool halls – you’ve probably heard about “pro taper” pool cues. For the novice, it may not matter too much, but if you’re considering getting your own cue, it’s important to know what makes them different from other cues and why you might want to use one. But first off, what is a pro taper pool cue?

A pro taper pool cue has a shaft that only begins to increase in diameter a certain distance from the tip – usually about 12-14 inches. This means that the portion of the shaft closest to the tip is a straight cylinder, while the portion closest to the joint is tapered. Many professional players prefer this design because it can improve performance in multiple ways.

The majority of pool cues have either a European (or “straight”) taper or a pro taper.

A European taper means that the entire length of the shaft (or the whole cue) is tapered, gradually growing in diameter from the tip to the joint (or butt). This is sometimes referred to as a “conical taper” because the whole shaft has a very narrow cone shape.

Despite the name, these are very common not just in Europe but also in the U.S. and Canada. Most of these have tips 12mm or smaller. Most house cues and one-piece cues feature a European taper.

As stated above, a pro taper shaft has the same diameter from the tip to a certain point along the shaft (usually around 12 inches down), where the diameter begins increasing toward the shaft. This makes it look almost like an elongated funnel.

Most pro taper shafts begin to cone out around 12-14 inches from the tip, but some types start anywhere from 4, 8, 10, or 15 inches. Many manufacturers have their own variations on the pro taper, whether it’s more curved, less gradual, or incredibly subtle. In any case, the majority of 2-piece cues and high-end shafts feature a pro taper.

The invention of the pro taper pool cue is often attributed to legendary cue maker Herman Rambow, but there’s not much evidence to back this up – it’s still unclear who coined the idea.

What we do know, however, is why they’re used.

What Are the Benefits of Using a Pro Taper Cue?

A pro taper pool cue can be beneficial for two main reasons. First, the design typically means there’s less weight or “end mass” near the tip, which can help reduce cue ball deflection. Second, the consistent shaft diameter near the tip can reduce interference from the bridge hand, potentially making for smoother, more accurate strokes.

Cue ball deflection – often called “squirt” – is when the cue ball diverges from the stick line after the stroke. Squirt is most noticeable on shots involving English or sidespin – if you impart left spin, the cue ball will squirt to the right, and vice versa. Squirt is caused in large part by the mass of the shaft close to the tip. 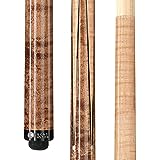 A pro taper shaft also tends to be more flexible, which allows it to slightly bend away from the cue ball immediately after the stroke instead of staying in contact, further reducing squirt.

For a more detailed explanation of squirt and what causes it, check out my article on Low Deflection Cues.

Since a pro taper shaft has a consistent diameter on the portion that rests upon the bridge hand, it can’t really interfere with the stroke.

With a European taper, the steady increase in diameter can cause the tip to rise slightly as you slide the cue forward over your bridge hand during your stroke. With an open bridge hand, the tip may even move a little to the left or right. Since pool is all about precision, this can have a massive impact on your game.

If using a fairly tight closed or looped bridge (with your finger wrapped around the cue), a conical taper shaft may run out of room and jam up against your finger as it slides forward.

With a pro taper shaft, these problems are virtually nonexistent – unless, of course, you like to keep your bridge hand a full 12 inches back on the shaft!

If you’re trying to decide whether or not to buy a pro taper cue, see if you can convince a friend to let you try one out for a few sessions. Some pool halls may even have one or two in their selection of house cues. Or you can buy a fairly inexpensive one to play around and experiment with.

Pro taper cues are named as such because so many professional players prefer them. However, plenty of pros still use European taper cues. At the end of the day, it’s all about what you’re comfortable with and what lets your hard-earned skills shine through the best.

How Much Does it Cost to Refelt a Pool Table?

How Are Pool Balls Made?