What is English in Pool? A Simple Explanation If you’re new to pool, you may be confused by the term “English” that’s commonly used among pool enthusiasts. Along with English, you may have heard the term “squirt,” “left English,” or “right English.” Well, if you’re confused by English, don’t worry. This article will clear everything up for you by answering the question: What is English in Pool?

In short, English is the spin you put on the cue ball when hitting it anywhere but dead center. Whether you know it or not, English is used all the time in pool and is one of the main ways to control where the cue ball ends up after coming into contact with an object ball.

When you hear people talk of sidespin in pool, they’re talking about English (sometimes spelled english) under a different name. Any time you hit a cue ball even slightly off-center, you create English or sidespin. The further away you get from center, the more pronounced the English.

Most novice players, once they learn the fundamentals of the game, start to experiment with English to improve their game. They often do this instinctively, even if they don’t know the term English. This is because it’s such a large part of the game.

Other novice players find themselves suffering because of unintentional English, which causes their shots to go wide.

A Breakdown of English in Pool

You can get a lot of cue ball control when using English correctly. You may think of English as something to use to make the cue ball travel left or right, but you can also use it to make the ball roll forward or backward. Here are some of the most common uses for English in pool.

Setting Up Your Next Shot

Ever wonder how players run the table, making shot after shot? They use English to position the cue ball for the next shot. Meaning they put spin on the ball to make it go where they want after sinking an object ball. This is hard to do at first, but you can master it with practice.

English is also a great tool for playing defense. If you don’t have a way to set up your next shot, you can always position the cue ball to make things harder for your opponent.

English can also curve or “swerve” the cue ball around a ball in your way. If you want to hit a ball that’s slightly behind another ball, you can master “swerve” (which we discuss below) to develop this highly important skill.

You can also transfer English from the cue ball to the object ball when done right. This, sometimes called “throw,” is hard to master, but it can be very useful during the course of a game. Keep in mind that the direction change transferred to an object ball is very small— usually 5 percent or less.

Rai or bumper shots can also benefit greatly from English. If you’re doing a bank shot, you need to not only hit the rail at the correct angle, but you need to put the correct amount of English on the ball so it goes where you want. This is perhaps the most used tactic for English.

I mention the terms “throw” and “swerve” above, which I define below. “Squirt” is another term you should be familiar with in order to understand English.

To learn to use English properly, you must first understand what it is.

Understanding and Learning English in Pool

If you imagine the cue ball with different markings, it’s easy to understand English. In fact, pre-marked training cue balls are available for those who want to get better at pool and learn to use English to their advantage.

Related Article:  Why Do Cue Balls Have Red Dots?

This Aramith Jim Rempe training cue ball is marked for beginners on one side and more advanced players on another. The various markings tell you where to hit the cue to get a specific type of English or sidespin.

Cue balls like this are very effective teachers. Once you get used to using a marked cue ball, you can then imagine the same markings on a regular cue ball, allowing you greater control during gameplay. Practicing with one of these marked cue balls is the fastest way to master English. 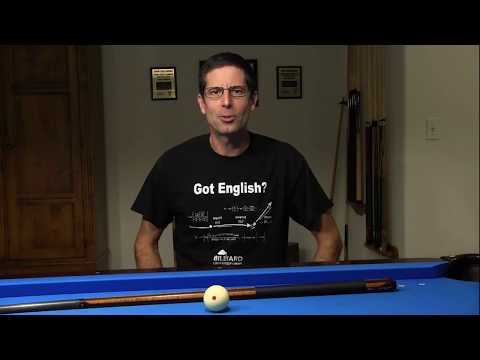 How To Measure a Pool Table…the Right Way

How Long Do Pool Tables Last?