Anyone who has done any shopping for a pool cue has come across the different taper styles available. But unless you already know the game of pool pretty well, you’re not likely to know what the different tapers are all about or which one is “better” than the other. In other words, it’s hard to know which taper means what unless you have a pool cue shaft taper explained.

There are two main types of pool cue tapers, Pro and Straight, also known as European. In theory, each style provides the shooter with certain benefits. But, in practice, many a novice pool player will not likely notice the difference. Still, if you’re looking to up your game, it’s good to know which is which.

The pro taper describes a cue that is one single diameter from the tip back to about 14 or 15-inches down the shaft. Then the shaft starts its steady taper all the way to the butt of the cue. In essence, the pro taper does a couple of things:

On some cues, the non-tapered shaft ends at the joint, while on others it ends near the joint. Most two-piece cues are designed standard with the pro taper. Some cues have the non-tapered area to 12 or 13-inches from the tip. Either way, they’re designed so there is no diameter change anywhere a normal player would place his or her bridge hand.

It’s known widely as the European taper although it’s common to find these cues all over North America, too. Also known as the straight taper, this type of cue is shaped like an elongated cone. This means that there is a taper all the way down the cue, from the tip to the butt. No two places on the cue will measure the same diameter. Most single-piece house cues are designed this way.

The straight taper does a couple of things:

Some cues that are still considered European tapers feature a more drastic taper at some parts and a gentler taper at other parts. It may be that the sharpest taper happens in the few inches behind the ferrule, then it evens out around the joint.

Although these are the two main types of tapers, many companies are experimenting with different tapers at different areas of the cue, trying to get the best of all worlds. But the thing about tapers is that they’re inexorably tied to shaft mass and deflection. Here’s how. 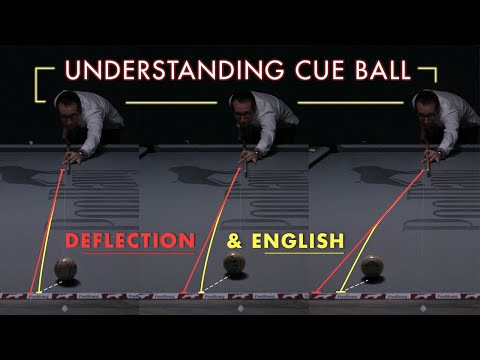 I would be remiss if I talked about cue taper without talking about shaft mass and deflection. These three factors are all tied together and a player who wants to become the best possible should be familiar with the different options out there. So, let’s start with deflection.

Deflection, also often called squirt, happens when the ball is hit with English (spin). So, anything but a straight shot, when the cue hits the very center of the cue ball, will have some deflection.

Essentially, deflection is due to the tip of the cue moving off to one side when the cue strikes the cue ball. Most players know instinctively that the direction of deflection is opposite to the English put on the ball. In other words, right English results in left squirt, whereas left English causes right squirt.

So, in order to become a good pool player, you must learn to compensate for squirt. And the right cue can help do this.

You’ve probably heard of low-deflection cues. The whole idea behind these cues is to reduce the density and mass of the tip. Because the more mass in the cue tip, the more deflection you’re going to experience.

So low-deflection cues are able to kind of bend out of the way of the cue ball in the millisecond following a hit, therefore reducing deflection. This is done in a couple of different ways. There’s a balance to strike, and there are some materials and tactics that tend to help strike the balance between strength, durability, and low-deflection.

The various cue makers have different lines of cues that use one or more of these tactics to get the lowest deflection possible. And now that we’re talking about tip mass, we need to circle back around to shaft taper.

The style of taper contributes to the mass in the cue tip. Those pro taper shafts that are skinny for the 13 or 14-inches of the tip will have less mass than a European taper shaft, provided that all other factors remain the same.

The cues with the lowest deflection are generally made from carbon fiber, with a pro taper, and a tip between 11.5mm and 12.5mm in diameter. Now, that doesn’t mean that there aren’t low-deflection shafts made with European taper. There are plenty out there. But when we’re considering these kinds of shafts, we have to consider the movement of the cue in the bridge hand, as mentioned at the beginning of this article.

If you’re new to pool, it’s probably overkill to start worrying about the shaft taper. The best thing you can do is try a few different styles and see which one works for you. But that doesn’t mean you have to go out and purchase three or four cues. A cue is a tool that can help you, but it’s not going to make or break your game. Only you can do that.

Most players simply stick with the type of cue they’re used to. Whether that’s a one-piece house cue or a $500 two-piece, low-deflection cue isn’t going to matter all that much at the end of the day. It’s the wielder of the cue that matters.

Are Mini Pool Tables Worth It? A Complete Guide