What Cue Tips Do the Pros Use? If you’re passionate about pool, you probably know the names of a few pro players. Maybe you’ve watched them win tournaments on TV or you’ve seen YouTube videos of their amazing shots. It’s nice to have pro players to look up to and emulate. This is why one of the more common questions among amateur players is, “What cue tips do the pros use?”

The different types of tips the pros use are as varied and unique as the players themselves. Each pro player has his or her own preferences as far as hardness, brand, and specific use. A pro player may even switch tips depending on how they’re feeling or playing. Others play with tips from their sponsors. However, there are some favorite brands among pro players, including Elk Master, Kamui, Predator, Tiger, and Le Pro.

The Danger of Using “Pro” Equipment

It’s interesting to know what kind of equipment pro pool players use. But that’s all it should be: interesting. There’s a tendency for some people to put too much emphasis on the equipment and not enough on practice. There’s no magic bullet that will make anyone a better player. Only practice can do that.

You don’t often hear a pro pool player attributing his or her game to the cue tip (unless they’re being paid to say so). The cue, shaft, and tip are all tools that a player uses, but the skill to use those tools have very little to do with the tools themselves, and more to do with the persistence and practice that the player has put in over the years.

That being said, there do seem to be some favorite tip brands that many of the top players use. So let’s take a look at what could make these tips so good.

What Makes a “Pro” Level Tip? 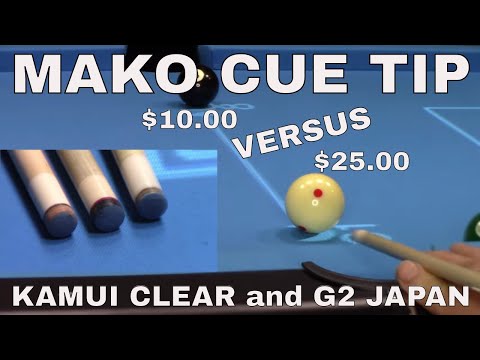 The truth is that I could dig up information on the types of cue tips some of the top players are using right now. But that information would likely be outdated almost as soon as it was published.

With the exception of the sponsored players who have contracts to use certain tips, most players will use whatever they feel most comfortable with at the time. They may try different tips, find one they like, and stick with it for a little while until they try another one they like.

Other players don’t pay much attention to the brand of cue tip. Instead, they focus on hardness and size. Still, other players will buy a certain type of tip and then bang it on the floor until it gets compact and hard.

There are also pro players that pay no attention whatsoever to the type of tip they use; they can and will play with anything.

As such, it’s always a better idea to find out what kind of tip works best for you. To do this, you should be familiar with a few cue tip factors.

There’s a wide range of tip hardness, with the most common being soft, medium, and hard. There are tips available that lie somewhere on this hardness scale, such as extra soft, extra hard, medium-soft, and medium-hard. This means that a hard tip from one company may be of a different density than a hard tip from another company.

Still, for most new and intermediate players, a medium tip is best overall.

Most pro players don’t concern themselves with having their cue tips replaced. They may even have them replaced after every game, or they may go a very long time without getting a new tip put on. It all depends on the player’s preference.

Hard tips, obviously, hold up longer because of their density. Soft tips can mushroom fairly quickly, especially when they’re used for break shots. However, some players like it when their soft cue tips mushroom and compress because they like the feel of how it plays.

Another factor that you should consider when choosing a tip is its use. Some players have cues with different tips on them for different uses. Hard tips are generally used for breaking or straight, powerful shots. Medium tips are usually used for general play. And soft tips are used for finesse shots that require more English.

Of course, there are numerous exceptions to the above guidelines. Some very successful and talented players will play with only hard or only soft tips, exclusively. They may not even have a specific reason for this besides liking the “feel” or “play” of that type of cue tip.

Finally, and perhaps most importantly, we have consistency. This is one of the most desirable traits in a cue tip. However, it’s hard to attribute consistency to a cue tip alone. After all, we all have good and bad days. As much as we would like to blame it on the tip or the cue itself, it’s more often just an off day.

But, when you play enough and get your pool instincts ingrained, you start to get a feel for different tips and cues. This is part of growing as a pool player and developing your skill.

And this is one reason why many pro pool players will continue to try different cue tips. They’re constantly trying to evolve and get better, and they listen to their instincts when they say it’s time to try another cue tip or shaft.

At the same time, they know that another cue tip won’t drastically change their game one way or the other. It’s all about incremental change in the right direction.

I mentioned a few tip brands at the beginning of this article. The majority of pros use one of these brands, but chances are you already use tips from one of these companies, too. As such, here’s a low, medium, and high-end choice of tips for you to choose from if you’re looking to try something new. 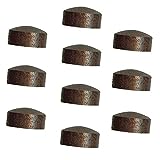 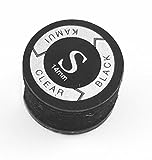 It would be nice if I could point to one single cue and say “This is the one the pros use and it will change your game.” Unfortunately, that would be like saying that if you wore Nike Jordan’s you would become a better basketball player. Only in a perfect world.

If you want to know the type of pool tip a specific pro uses, you may be able to find the information online, but I wouldn’t put too much thought into what other players are using. Experiment with different sizes, hardnesses, and brands to find the kind of tip you like. And practice, practice, practice.

How to Identify Aramith Pool Balls

Are Pool Tables a Good Investment?