What Are Pool Balls Made Of? Throughout the history of billiards, pool balls have been made of many different substances. Each one, at its time of use, proved to be somewhat superior to its predecessor although none of them were ever perfect.

Some of them would crack after long periods of use, others wouldn’t hold their roundness and even others had the potential to explode during game play! Talk about an exciting game of pool!

But with such a vast history behind the game of pool, and the equipment used, the question lots of players ask is, ” What are pool balls made of?”

Today, pool balls are made of either polyester or phenolic resin. Billiard balls made from polyester resin are usually more affordable but they don’t last as long, whereas those made from phenolic resin are expensive but are of higher quality and last up to eight times longer.

Upwards of 85 percent of balls are manufactured by one company, Saluc. Otherwise known as Aramith or Brunswick Centennial, they use phenolic resin, a mix of phenol and formaldehyde creating a very strong, durable, scratch and chip resistant product that outlasts the majority, if not all, of its competitors.

This substance is currently the best option for billiard balls out there today. More on phenolic resin later, though, let’s dive into how and why we came to use this substance in the first place.

History Of Billiards And The Balls

A billiard type game dates as far back as the 1340’s as an outdoor game with similarities to croquet. Somewhere within 1461 and 1483, King Louis XI of France was recorded having the first indoor billiards table.

Since there was not a lot of fancy new age materials at their disposal back then, the balls were made out of wood. As you could imagine, wood balls were not always perfect in weight or balance and would chip and crack often.

Ivory became the new option for billiard balls in 1627, however, and there was even a set of ivory balls in the inventory of the Duke Of Norfolk recorded in 1588. These balls were made from the tusks of elephants, and since you could only make 8 balls per adult elephant, they were more for the wealthy players.

Some who have played with ivory balls claim it is a better experience, as ivory balls respond how billiard balls should. I wouldn’t know personally.

There were two downsides though, one was that ivory balls were known to crack and chip sooner than players would like, and two, we were going to run out of elephants to harvest. Ivory balls would be discontinued due to the threat of elephant extinction centuries later.

In 1862 a man by the name of Alexander Parks came up with a plastic called parkesine. However, it did not work for commercial scale manufacturing, and was not strong enough for the constant abuse of pool.

Needing a solution, a billiard table company by the name of “Phelan and Collender” offered a $10,000 (close to $200,000 today) prize to whoever could come up with the successor to ivory.

Celluloid, also known as flash paper, pyroxylin and gun cotton, was the first ever synthetic plastic and it could be manufactured on a commercial scale. However, this product was combustible and flammable, causing explosions during manufacturing. Sometimes during play as well.

Not literally in a game of pool would a ball just explode, just on a good hard strike the balls could ignite with a loud BANG! Hyatt could remember a billiard hall proprietor once wrote him stating that he did not care so much about it, but that instantly every man in the room pulled his gun.

There is no evidence that Hyatt received the reward for creating a new substance replacing ivory.

In 1907, Phelan Leo Baekeland invented a new plastic called bakelite. This substance was easy to produce/manufacture, more durable than celluloid and best of all, didn’t explode! By the mid 1920’s the majority of pool balls were being made of bakelite.

How Are The Balls Made Today? 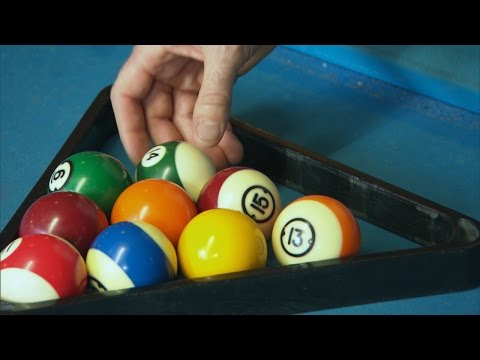 85 percent of the balls manufactured today are phenolic resin (which essentially is bakelite, just made under more pressure) by a Belgin company named “Saluc.” Phenolic resin is a thermosetting plastic, meaning, once it is melted into place, it cannot be melted again.

Solids are pretty self explanatory, stripes on the other hand have to be molded together where the different colors are joined. They are just as strong though!

Saluc molds the material under very high pressure to increase density and hardness. Once cured, the balls can withstand 5 tons of pressure! Even the stripes will not break at the joints like you would expect, they shatter!

Aramith, aka Saluc boasts many achievements with their balls. They claim that their balls will last up to 40 years and/or 400,000 impacts, which is 5 times longer than competitors! The gloss stays strong for many many years and does not wear off from the high friction caused between the felt and the ball after a strike.

Another claim found on their site is the uniformity of each ball. They are perfect through and through, with a homogenous construct. Every ball is perfectly balanced and has a true center causing each hit to act how it is supposed to.

As perfect as these balls are made, they are not all the same weight. After a ball is created, it is weighed and sorted to match up a perfect set. Saluc seems to be pretty secretive on cool details, which I can understand, but apparently, it takes 23 days to make each ball!

For more information on Aramith pool balls, check out my article Are Aramith Pool Balls Worth the Money?

What Else Is Out There?

Indeed there are other pool ball manufacturers making a good product today, and all seem to be pretty secretive about their process as well. The common material used with most other manufacturers is polyester resin. These sets are cheaper than the phenolic resin sets usually, but still have high reviews.

Brands like Iszy, Diamond and Viper plus many more have thousands of happy customers and good reviews producing a polyester ball. Iszy also has a marble swirl set that is super cool looking and voted top 10 sets of 2019! You can check them out here, on Amazon.

Polyester balls are pretty popular and are good balls for the price, however, they are a bit cheaper for a reason. Brands that produce polyester balls don’t have strong claims like Aramith with the phenolic balls. Also, polyester balls seem to look more worn and loose their shine faster than phenolic. All in all though, polyester is not a bad choice, you just may be replacing them quicker. Especially if you are playing a lot.

Spencer Martson has a set that is made out of epoxy resin! I don’t know a lot of details on these yet, but the company claims this epoxy set is very durable, and has a lifetime warranty! So I’d say they must be okay.

The poison is yours to choose from if you are looking to buy a set of pool balls. Phenolic resin balls made by Saluc will last you the longest and be very true. Polyester and acrylic come in some super cool looking sets and can be very good balls for a long time, however, they are cheaper and will need to be replaced much sooner than phenolic resin.

Well, I hope you enjoyed this walk down memory lane as much as I did. The history of anything is interesting, especially a game such as billiards. From endangering a species to inventing plastics, the way not only this game evolved but humans as well is super impressive.

The History of Billiards (Pool): So Very Interesting

Is It Ok To Stand On A Pool Table?