9-Ball is considered the most popular pool game behind 8-ball. It’s generally a quicker game not only because it is played with fewer balls than 8-ball, but because the rules are different, as well. Many people consider it to be a simpler game than 8-ball, while others say the opposite is true. The fact is that 9-ball is easy to learn, fun to play, and a favorite by many pool players. It’s a great game for developing skill— especially in regards to combination shots. So, here’s how to play 9-ball.

9-ball is played with 9 object balls, numbered 1 through 9, and the cue ball. The rest of the balls are left in the pockets or removed from the table for the duration of the game.

So, it would be possible to win the game with all 9-balls on the table, provided the shooter hit the 1-ball with the cue ball first.

Unlike 8-ball, the players don’t have their own set of balls to shoot. Instead, they’re both using the same balls and each has the same objective: to legally sink the 9-ball first.

In 9-ball, the object balls are racked in a diamond shape. Three of the nine balls need to be specifically placed in order for the break to be legal.

Although it’s easier to rack 9-ball with a diamond rack, it’s also possible to do it with the 8-ball triangle rack. To do this, set the triangle rack on the foot spot like you would in 8-ball. Place the 1-ball at the apex of the triangle, and then build out the rest of the diamond, taking care to make sure the balls are touching. 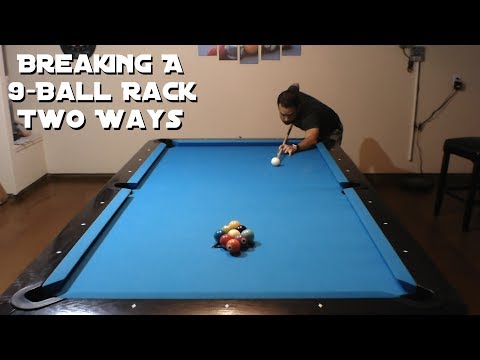 Once you have a legal rack, it’s time to break. Like in 8-ball, the breaker can shoot from anywhere behind the head string (designated by the middle diamonds at the head of the table).

In order for the break to be legal, a ball needs to be pocketed OR at least 3 object balls must contact a rail or rails. If neither of these two requirements are met, it’s an illegal break. In the event of an illegal break, the balls are re-racked and the opposing player can either choose to break himself or have the original breaker re-break.

It is possible for a breaker to commit a legal break as defined above but to also foul on the break shot. Here are the break shot fouls:

All of these fouls result in ball in hand for the opposing player. Any object ball that is driven off the table on the break needs to be pocketed to remain out of play. The only exception is the 9-ball, which should be spotted at the foot spot before play can continue.

Winning on the Break

If the breaking player hits the 1-ball with the cue ball and manages to sink the 9-ball on the break, she automatically wins the game, provided no fouls were committed during the break.

This is incredibly hard to do, but it’s definitely possible.

It’s fairly common for players in a friendly game to determine who breaks first with a coin flip or a best-out-of-three roshambo. From then on, players alternate breaking. However, in professional tournaments or league play, it’s often decided by a player’s rating. If they have no rating or the same rating, a lag shot is often used.

A lag shot between two players is done at the head of the table. Each player gets a ball placed behind the head string. The objective is to shoot the ball down the table, make contact with the foot rail, then cause the ball to come to rest as close to the head rail as possible without touching it.

A bad lag shot is one in which a player’s ball:

If the breaker legally pockets a ball on the break shot, he can continue shooting until he misses or commits a foul.

The lowest numbered ball on the table must always be contacted first by the cue ball in order for the shot to be legal. As long as the player is making legal shots, he can continue shooting.

For this reason, it’s not uncommon to see good players win a game without their opponent ever having a chance to shoot. But then it’s the opponent’s turn to break and she can do the same thing if she’s good enough. The winner is determined by the winner of a set number of games, or whoever is ahead when one player leaves.

There are several ways to foul during gameplay. Here are the most common, and all of them result in ball in hand for the opposing player. 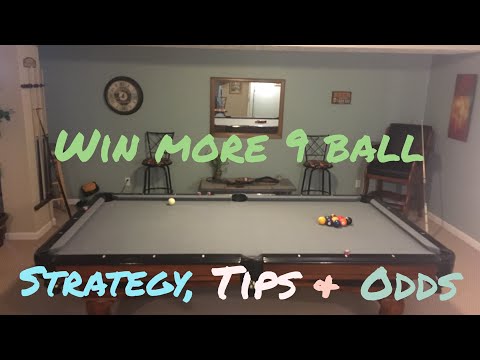 The first player to legally pocket the 9-ball wins the game. However, there are other ways that a player can lose the game.

Three Fouls in a Row

When a player commits three fouls in a row, meaning they don’t make a legal shot between any of the fouls, the other player wins the game. However, it is the duty of the other player (or referee, if one is present) to notify the offending player when the second foul has occurred. This usually entails telling the offending player that if they make one more foul, they lose the game.

If the player is not notified beforehand and makes another foul, he or she does not lose the game. The player must be notified in order for the game to end legally due to three consecutive fouls.

Leaving While the Game is Underway

Like in most other billiard games, if one player leaves without notifying anyone, the game is automatically forfeit. But, if the player’s property remains (jacket, cue, etc.) and it can be reasonably assumed that the player will return shortly, it’s not an automatic forfeit. Generally, the rule is to give the absent player 15 minutes to return before the game is forfeit.

9-Ball is a fun, quick game that many people like for its unique challenges. The fact that you can win the game with a combination shot helps players develop combo shot skills that are essential for advancing as a player. Overall, the rules are easy to learn and are pretty standard throughout the pool world.