Unless you play in a league or professionally, you probably play 8-ball according to rules you’ve learned over the years. Most people who play 8-ball pool do so under the umbrella term of “bar rules.” But, the problem with this is that it seems like everyone has their own set of bar rules. The overall structure of the game is the same, but there are some key differences that can turn a friendly game into an argument. No one wants that. This is why I’ve gathered information on how to play 8-ball: 8-ball rules explained.

Here’s everything you need to know, based on rules that the major tournaments follow.

The top of the triangle should be placed at the foot spot on the table, which is generally clearly marked. If it is not, you can find the foot spot by looking at the diamonds/spots along the railings of the table. If you drew an imaginary line between the two parallel spots denoting the bottom quarter of the table. In the middle of this line is the foot spot.

Once the balls are racked in the triangle, they should remain touching when the rack is removed. 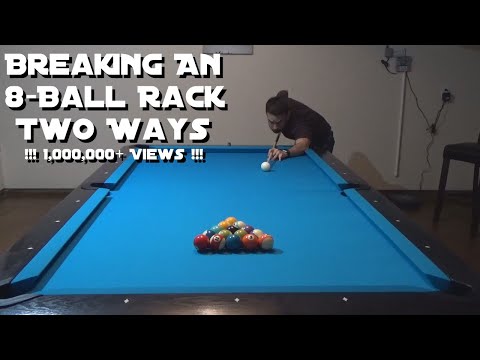 Once the balls are racked, it comes time for the break shot. To determine who breaks, a coin is generally flipped in a friendly game. In league or tournament play, the player with the lowers speed rating breaks first. If both players have similar speed ratings, or there is no rating system in place, a lag shot determines who breaks first.

Each player has a ball placed behind the headstrong with enough room between them for each player to shoot at the same time. Each player shoots their ball down to the foot string with the object of having it come to rest back near the head of the table, without touching the rail.

A lag shot is bad if the ball becomes pocketed, touches a side rail, passes over the long string (the imaginary line that bisects the table lengthwise), or contacts the other player’s ball.

The break shot must be done from behind the head string, otherwise known as “the kitchen.” The cue ball doesn’t have to strike any particular ball first. For the break shot to be legal, one of two things must happen:

If the player legally pockets an object ball (other than the 8-ball) he or she gets to keep shooting until a foul occurs or a shot is missed.

If the breaker pockets an object ball on the break, the table is still open, meaning solids of stripes can go to either player. The same can be said if no ball is pocketed on a legal break shot.

However, if the breaker makes another shot, then that group belongs to that shooter for the duration of the game.

Now is a good time to mention call shots. Most professional tournaments require players to call their shots, unless the ball and the corresponding pocket is obvious enough that it doesn’t need to be called.

However, if you’re playing a friendly game, it’s up to you and the other player(s) to determine if you want to play a call shot game. If you do, then you must call balls and pockets before each shot, aside from the break shot.

There are several ways to foul during the course of a game. Here are some of the most common.

During call shot games, there’s usually an option of calling a “safety” before a shot, which would end a player’s turn regardless of the outcome of the shot. The rules surrounding safeties vary depending on the game and the rulebook. Most “friendly,” bar rules games don’t have a safety rule.

The player to win the game of 8-ball is the first player to legally pocket all of the object balls of their group (solids or stripes) and then to legally pocket the 8-ball without fouling. But, there are other ways games can be won, generally if the other player makes a game-losing mistake. 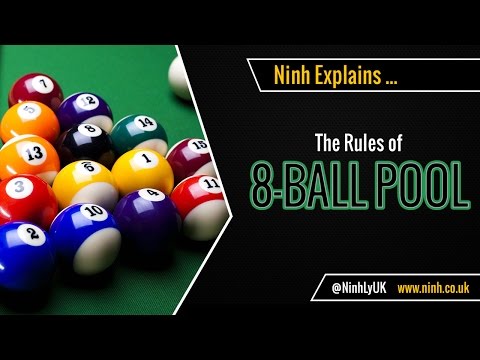 The information above is a detailed framework for playing 8-ball with friends. If you’re playing in a league or a tournament, it’s best to familiarize yourself with those particular rules, because there are some differences. Like other pool games, the rules can vary depending on who you’re playing with and what rules they follow.

But, most of the professional pool and billiard organizations follow similar frameworks in terms of the major rules governing the game. If you’re looking for a simple version of 8-ball rules, visit my other article here.