How Does a Pool Table Recognize the Cue Ball?

Most of us have played at least one game of pool on a big, boxy, coin-operated pool table in an arcade, restaurant, bowling alley, or bar. They seem simple enough – you feed in your quarters or tokens to release the balls, and as you pocket each one, it returns to its windowed enclosure to await the next round.

But have you ever wondered why, whenever you scratch, the cue ball always goes straight to the head of the table instead of winding up trapped with the object balls? We certainly have, and that’s why we’ve found the answer to the question, “How does a pool table recognize the cue ball?”

Coin-operated pool tables recognize and separate the cue ball from the object balls using either magnets, optical sensors, or an oversized, undersized, or weighted cue ball. The method used in a given table depends on the manufacturer and when it was made. Some methods are considered less than ideal because they can change the dynamic and physics of the game.

The first recorded patent for a coin-operated billiard table was issued in 1903, with a price per game of one penny. Unfortunately, it’s difficult to find much information about the early design evolution of coin-operated tables. But it’s safe to assume – for our purposes, anyway – that the basic ball return design hasn’t changed too much since the early days. Here’s the general idea:

Under the table’s playing surface is a maze of ball tracks. This consists of 6 sloped trenches connecting each of the six pockets to one central trench. At the lowest end of the central trench is the ball separator, which sends the object balls down a track leading to the ball trap and diverts the cue ball down a different track toward a cubby at the head of the table.

The design of the ball separator is a little different depending on what kind of cue ball recognition method the table uses. So let’s take a look at each method in turn.

One early method for cue ball recognition was to simply use a slightly bigger cue ball that couldn’t pass a certain threshold. These oversized cue balls typically have a diameter of 2 ⅜ inches, a slight step up from the standard 2 ¼-inch object balls.

A strip of metal called a ball shunt is installed at the ball separator interchange, just high enough to let the object balls pass underneath it. The cue ball hits the shunt and rolls off down its own track.

This type of table is no longer made because the added size and weight of the cue ball can affect game dynamics, particularly on shots straight along the rail (since the skewed contact point will exert a slight lateral force), and on shots involving any form of English. However, these tables are still used in many settings, particularly bars and recreation centers.

Using a slightly smaller cue ball was the preferred method for decades in British-style pool or “Blackball” as it’s often called. This is primarily played in England and Australia, typically on 6’ or 7’ tables, with slightly smaller balls to begin with – typically 2 inches in diameter.

On these British coin-op tables, the smaller cue ball (usually 1 ⅞-inch) simply falls through a sort of trap door and rolls to the head of the table while the object balls roll right over the opening and on into the ball trap.

These tables are rarely found in the U.S. and aren’t typically manufactured anymore – again, because the smaller, lighter ball will change the game dynamics as mentioned above (only inverted). However, since these tables were so commonly used, smaller cue balls became the norm, and many players still prefer to use them today.

Some coin-op tables use a cue ball with the same diameter, but with a small weight inside that brings the ball’s weight up to about 6.7 ounces. The object balls remain at the standard 6 ounces. As the balls approach the separator interchange, the heavier cue ball activates a mechanical rocker or lever that blocks and diverts it to a separate track.

Weighted cue balls won’t have as profound of an impact on game dynamics, being the same size as the object balls, but the extra mass will still affect the ball physics significantly, particularly on shots with any sort of spin.

The most common method of cue ball separation used today involves the use of magnets. This design was first patented in 1966 by the prominent pool table manufacturer Valley (now known as Valley-Dynamo). These tables require the use of a specially-made cue ball with metal inside.

In most magnetic coin-op tables, the ball separator is a slightly sloped trench with two ball tracks side-by-side. As the balls enter the separator, a magnet on one side of the trench pulls the cue ball over to one track while the object balls continue down the other track. Other designs feature a magnetic sensor that triggers a deflection device when it detects the cue ball.

There are three main types of cue balls for magnetic ball returns:

These cue balls are made by blending particles of steel with the ball material itself, before molding it. This can give it a grey-ish look. They got the nickname “mudballs” because they tend to be a little heavier and have less elasticity than a normal ball.

Most magnetic cue balls are built with a core of metal inside them. These are often referred to as cat’s eye cue balls because early versions had a visible circle where the hole was drilled to insert the metal plug or bearing and re-sealed. Since they’re not one solid piece, these can also behave a little differently and are more susceptible to cracking or chipping if subjected to a lot of abuse.

Some magnetic cue balls are made with a metal shell rather than a metal core. Many players prefer these kinds of balls because they tend to behave more like regular balls than any other magnetic cue balls. This Aramith Magnetic Cue Ball uses this design.

In 1999, pool table manufacturer Diamond Billiards patented a ball separator mechanism that uses an optical sensor to recognize and separate the cue ball from the object balls. This method is really only found on their “Smart Table” models. Without getting too technical, here’s how it works:

As the balls travel through the ball separator, the optical sensor measures the “optical density” of each ball’s surface. The white cue ball has less optical density than the colored and numbered object balls, so it triggers the sensor, which in turn activates a mechanical ball shunt, diverting the cue ball to a separate track.

This is the only type of ball separator method that doesn’t require modifying the cue ball in some way. But since it is also the newest method – and since Valley-Dynamo is by far the dominant maker of coin-operated tables – it hasn’t yet become as widespread as magnetic ball return systems. 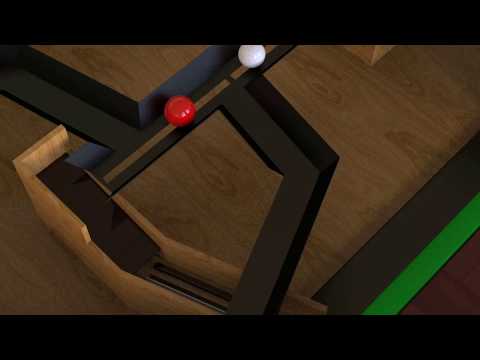 Is the Cue Ball Bigger or Smaller Than the Object Balls?