The appearance of a pool table can be deceiving when you’re figuring out how to move it. You may measure the table, the distance between the legs, and the doorways you want to get it through and determine that it will be no problem. Just flip the table on its side and maneuver it through the doorway.

After all, doors are the hardest part of moving furniture, why should a pool table be any different? Unfortunately, this couldn’t be further from the truth. So, with this post I’ll be answering a very common question: Can you move a pool table without taking it apart?

You can move a pool table without taking it apart, but there are many factors to consider, like how far you’re moving it and the type of table it is. To avoid injury, damage to the table, and a massive headache, most tables should be taken apart to be moved.

Slate bed tables are notoriously heavy and difficult to move, even when taken apart. Other tables, like those made with MDF beds, are much easier to move without taking apart. But, it all depends on where you’re moving the table and what obstacles stand in your way. Read on to discover when to consider moving a table without taking it apart and best practices for having any pool table moved.

The risks involved in moving a pool table vary widely depending on the type of table, how far you’re moving it, how many people you have to help, what type of equipment you have, and whether there are stairs involved. Below are some of the most general risks of moving a pool table.

How Far Can A Pool Table Be Moved Without Taking it Apart?

Moving a pool table a short distance can be done without taking it apart. In fact, disassembling the table just to move it to another room or out of the way isn’t usually a good idea. It depends on whether you can fit it through doorways easily while it’s fully assembled. If you have to go up or down stairs, you’ll probably want to disassemble the table to reduce the risk of damage and injury.

Take a hard look at where you want to move the table. Measure doorways and tight spots. If you’re not absolutely certain you can get the table through without having to take it apart, go for it. We have outlined a process for moving a pool table without taking it apart near the end of this article.

Moving the table any further than the same house or building almost always requires that you take it apart. Particularly if it’s a slate table.

How Do You Move a Pool Table By Yourself?

Moving a pool table is never a one-person job. You will always need a group of 3 or more people to safely move a pool table. Attempting to move a table by yourself is not advised as you can injure yourself or damage the table easily. You may need to call a professional to move the table if you can’t do it safely and effectively.

Moving a Slate Pool Table vs An MDF Table

Slate pool tables are different beasts than MDF (medium-density fiberboard) pool tables. MDF tables are much lighter than slate pool tables and sometimes come with foldable legs. If you have an MDF table, you may be able to move it with two people without taking it apart, provided it will fit through doorways and around corners.

Slate tables are more popular and harder to move, given their weight and relative fragility. As such, we’ll focus most of the discussion below on moving slate tables.

How Much Slate Tables Weigh

To give you an idea of how difficult slate tables are to move, here’s a little breakdown of how much each size weighs.

How easy it is to move a slate table without taking it apart also depends on whether it has a three-piece or one-piece slate. In fact, three-piece slate tables are made as such in part because moving a single piece of slate, even by itself, is difficult. It also increases the chances of breaking the large slate.

But, you would think that moving the table all together would reduce the chances of breaking the slate, right? This is true over short distances and only if you’re able to keep the table upright.

In fact, no matter how many pieces of slate there are, moving a slate pool table almost always requires that you re-level the playing surface. Three-piece slate tables come out of alignment easier than one-piece, but one-piece slate tables tend to put more stress on the frame when moved, which can easily tilt the slate enough to affect the way the balls roll on the table.

Can You Move a Slate Pool Table On Its Side?

One of the biggest problems with moving a fully-assembled slate table is the temptation to put it on its side. This is a temptation you should resist at all costs.

Moving an assembled slate table on its side is asking for damage. When tilted on its side, the slate rests all of its weight on the sides of the table. The sides may look sturdy, but they’re not designed to take that much weight and are easily damaged this way.

How To Move a Pool Table Without Taking it Apart

If you’ve made it to this part of the article, you’ll know that moving your pool table a short distance is entirely possible but not without risk. The following is for informational purposes only. We don’t accept any responsibility for broken or damaged pool tables! Here’s how to move a pool table without taking it apart.

Use the tape measure to ensure that you can fit the pool table through any doorways or around any corners without having to flip the table on its side.

Step 2 – Place the sliders or dollies under the table legs

You’ll need a couple of people to lift one side of the table off the ground and another one or two people to place the sliders or dollies under the legs. If you use dollies, make sure the wheels are locked (if applicable) or blocked so they don’t roll around when you go to lift the other side of the table.

Once you have all four wheels on dollies or sliders, you can then push the table to wherever you want it. It’s best to have one or two people pulling the table and the other two pushing it to maintain its direction.

Once it is in position in the new location, you can remove the sliders or dollies. If you use dollies, make sure to lock or block the wheels before attempting to lift one side.

When to Call a Professional

If you’re trying to move a table more than a short distance, you’ll probably want to involve a professional pool table mover. Companies that specialize in moving pool tables will have the experience and the know-how to get the job done right. They will generally do everything from disassembly to reassembly and even leveling the playing surface again.

Trying to move a slate bed table, or even a large MDF table without professional help is a recipe for injury, damage, and an all-around bad time. 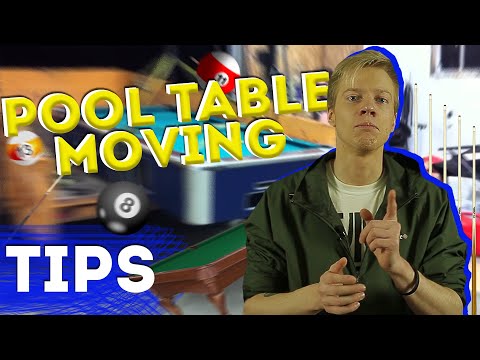