The savvy and price-conscious pool player is sure to have come across the different types of chalk at some point. When shopping for chalk, you’ll notice a rather large price difference when it comes to the major chalk brands on the market. The most expensive chalk out there is Kamui, coming in around $25 to $35 for a single piece. When people see this, they often ask: Why is Kamui chalk so expensive?

In short, Kamui chalk is so expensive because it lasts much longer than any other chalk on the market. Some players can go an entire rack or longer without re-chalking when they use Kamui. It also provides a better grip on the cue ball, making shots with English that much easier.

Does this mean that Kamui chalk is the best chalk for everyone? Absolutely not. Like many other aspects of pool, the chalk you use is based on your personal preference, experience level, passion for the game, and how serious you are about pool.

Read on to find out what exactly makes Kamui chalk so good— and so expensive.

Why Chalk At All?

Before we dive into Kamui chalk, let’s go over the basics of chalk for those who are just learning about pool. The main purpose of chalk in pool is to provide some friction between the smooth and rounded cue tip and the smooth and round cue ball. When you don’t use chalk, or don’t chalk often enough, you’re more likely to miscue, which can lose you a match real quick.

Chalk is especially important for shots with English, otherwise known as spin. English is an important part of pool, and therefore chalk is incredibly important, as well.

Many players also make chalking part of their preshot ritual. They mentally prepare themselves for the shot they’re about to take while they take a few seconds to chalk their cue tip.

Now, let’s talk about Kamui chalk and why anyone would pay so much for it when there are much cheaper brands on the market.

A Bit About Kamui

Kamui is a Japanese company headquartered in Hiroshima. Founded by Masato Hiraoka, the company originally made cue tips. It wasn’t until later that they started producing chalk as well.

The company gained recognition in 2007 when it was introduced at the BCA Super Billiards Expo. Their pig leather tips were quickly recognized as high-quality, and it wasn’t long before they became popular.

Their company motto, “Quest for excellence,” has proven fortuitous as they continue to make quality tips and chalk.

One of the complaints people have about Kamui chalk (other than the price) has to do with the chalk being too good. They find that when they use Kamui chalk like other brands, they wind up with too much chalk on their cue tip. The same can be said for players that like to chalk before every shot.

In order to properly use Kamui chalk, you need to know how to apply it.

When done this way, a single piece of Kamui chalk will last a year or more, easily.

How Kamui Compares to Other Brands

Kamui is very different from other chalk brands. Some players like this while others don’t. If you were to rub some Kamui chalk on your fingers, you wouldn’t think it was chalk at all. It feels closer to a gel, whereas cheaper brands feel grainy and flaky.

That said, it’s easy to apply too much Kamui chalk to your cue tip, which will then transfer to the cue ball and the billiard cloth. It’s easy to clean off, and somewhat easy to prevent in the first place, but old chalking habits die hard.

As far as Kamui chalk and spin are concerned, there are conflicting reports. Many players swear by Kamui chalk for applying English on a shot, while others prefer different types of chalk. Ultimately this likely comes down to player preference. 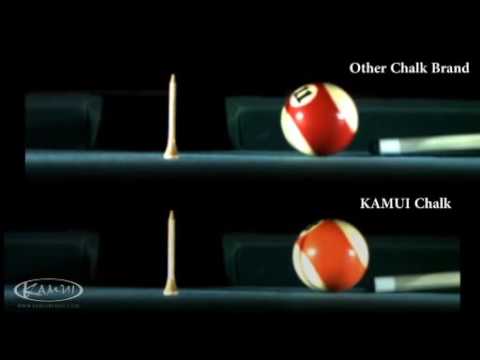 One factor that is not in question is the consistency and longevity of Kamui chalk. Since the chalk sticks to the tip evenly and stays there longer without re-chalking, it’s a great choice for those players who don’t chalk after every shot.

Of course, it’s also possible to use Kamui chalk if you do chalk after every shot, you just have to pay attention to what you’re doing so you don’t put too much on the cue tip.

At a glance, Kamui chalk seems super expensive. You can get a dozen cubes of low-end chalk for much less than the price of one cube of Kamui chalk. But where other chalk crumbles and comes off the cue quickly, Kamui goes on almost like a thick gel. You don’t get any falling on your hands or the table when chalking, and you don’t need to chalk the entire tip after every shot.

When you consider how long Kamui chalk lasts, it’s really not so expensive. Even for those who play several hours a week, a piece of Kamui chalk is likely to last over a year.

But, Kamui is not for everyone. It’s best for those players who are serious enough about pool to invest in their equipment and skill development. Casual players are probably better off with cheaper chalk.

If you want to try Kamui, there are two different types available: Kamui 0.98 and Kamui 1.21.

The 0.98 is softer than the 1.21, making it ideal for shots with extreme English. 1.21 is better for all-around play and is ideal for those who like to chalk their cues before every shot. 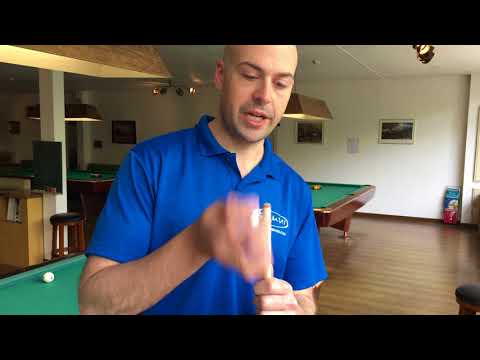