If you’re in the market for a pool table, you may not realize that choosing one is not as easy as it sounds. There are different types of pool tables out there, and determining which one is right for your particular needs can be a daunting task. But, in order to find the right table, you’ve got to start with the basics. And one common question I get a lot is, “What is a slate pool table?”

A slate pool table is a table that has slate, which is a type of rock, as the playing surface. The slate is then covered with billiard cloth for a smooth, consistent roll. Slate is considered the best playing surface available. Slate tables are used exclusively for tournaments and competitions for their durability, consistency, and precision leveling.

Slate is a kind of metamorphic rock that is known for easily splitting into large, thin “sheets,” usually gray in color. These “sheets” or slabs are very durable and strong, making slate an ideal material for many uses.

Slate is usually formed at low temperature and low pressure from sand, clay, and shale or mudstone. It has long been used as a roofing material and has also been used for blackboards, tabletops, tombstones, tiles, and even electrical panels. The term “clean slate” is a carryover from when slate was used for writing by teachers and school children.

The first time slate was used in a pool table was in 1826 by a man named John Thurston. He had been searching for a better material than wood, which had been previously used in pool tables. His idea to use slate changed pool tables to this very day.

For nearly 200 years slate has been the best material for pool tables, even when put up against all our modern synthetic materials. 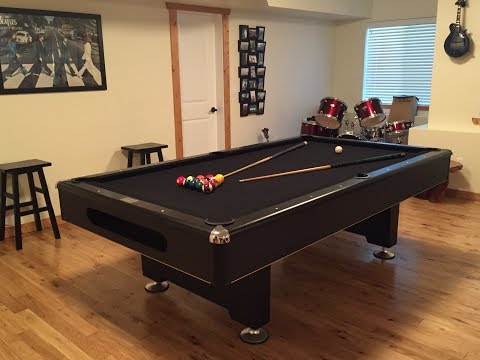 Since slate is so heavy, pool table manufacturers cut one large piece of slate into three smaller ones so it’s easier to move when the table is taken apart. On the other hand, commercial tables aren’t designed the same as residential tables. Most 1-piece tables have ball return mechanisms built-in and sometimes they’re coin-operated.

So, manufacturers make commercial tables with a heavy-duty, near-solid shell around the slate. These tables are designed to take continued beatings from repeated use and still hold up well over the years. They’re also not really designed to be moved too far, but when they are moved, the 1-piece of slate keeps the table somewhat level, whereas moving a 3-piece slate table can get the pieces of slate out of alignment easily.

So, if you’re looking for a table for your home, most of your options will be pool tables with 1-inch thick, 3-piece slate beds.

Quality pool tables’ slate beds are all cut from the same piece of slate. This means that, before the slate is cut into thirds, it is smoothed out to within a ten-thousandth of an inch, meaning the entire piece of slate is as level as it can be.

Related Article: How to Level a Pool Table the Fast & Easy Way

One of the big selling points for slate pool tables is how long they’ll last. As you can guess, slate isn’t really susceptible to moisture the same way that wood is. Humidity or a spilled drink on a piece of slate won’t do much of anything. But, the same on a piece of wood can cause the wood to warp and expand. Even if it’s not visible to the naked eye, the balls will tell the tale as they roll across the surface.

That’s not to say that slate is unbreakable. If you hit a slate table with a sledgehammer, it will likely break or crack. I’m not sure why you would want to do such a thing, but let’s just call it an example.

Likewise, if you’re transporting the pieces of slate to a new location (you should always take a slate table apart for transport) and you drop a piece, it will probably crack or chip. But, when cared for properly, a slate pool table can last a lifetime.

Since slate is so heavy (weighing around 450 pounds for an 8-foot table), the structure that holds it must be stable. This is another reason why slate tables are preferred over other types. The table is constructed to last nearly as long as the slate. The best tables are made from quality woods held together with heavy-gauge steel fasteners and brackets.

These are heavy, resilient tables that are well-constructed and designed to take a beating over the years. Of course, not all slate tables are equal. Some are better than others. But, most pool players consider the cheapest slate table to be better than the most expensive non-slate table. 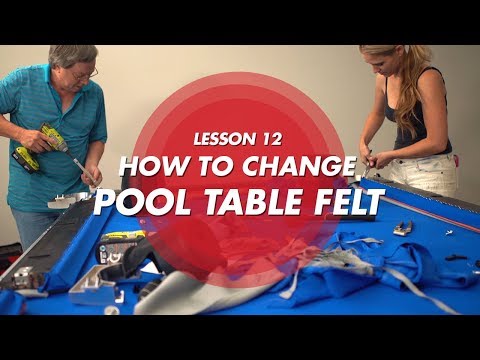 One nice thing about slate tables is that they can be re-felted. After many years of use, the cloth of any pool table will start to fade and become a hindrance to smooth and consistent play. When this happens, it’s time to replace the cloth (also called “felt”).

This requires taking off the rails and the pockets to fully expose the slate. When the old felt is removed, the new felt can be applied. Now, it’s possible for the pool table’s owner to do this, with the right supplies and patients. But, most people leave it up to professionals.

Some non-slate tables can have their cloth replaced, but not all of them can. Some tables are so cheap that the cost of replacing the cloth is nearly as much as the table itself. When that’s the case, the owner of a non-slate table may just buy another one and trash or give away the old one.

When done right, a slate table is disassembled and moved in pieces, then reassembled at the new location. Even moving a slate pool table from one room to another can be difficult and dangerous without taking it apart.

The fact is most pool tables won’t fit through interior doors in the home without some disassembly. And when you try to move a slate table without taking it all the way apart, you can easily damage the frame, break the slate, or injure yourself or others.

Non-slate tables are much lighter and therefore much easier to move. Some of them just need their legs removed so you can flip them on their side and bring them wherever you want them to go. Other tables have foldable legs for easy moving and storage. 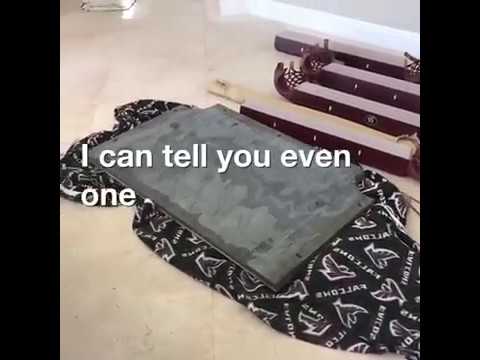 This is why I recommend that people think hard about getting a slate table if they tend to move a lot, or plan on moving in the near future. Hiring a professional to move a slate table costs anywhere from $300 to $800 dollars, depending on many factors.

But, if you’re going to stay put for many years to come, a slate table is probably the best option for you.

Other Types of Tables

Lastly, I’ll leave you with some other types of tables. This is just an overview, but it should give you a good idea of the alternatives to slate.

MDF stands for Medium-Density Fiberboard. It is just what it sounds like: small wood fibers pressed together and then sealed with a warp-resistant coating. Still, wood is wood and will start to war eventually.

Honeycomb tables have a layer of segmented plastic sandwiched between layers of flat plastic to create a smooth and flat surface. Over time, this plastic has been known to warp slightly, and people say that it’s not as smooth as playing on a slate table.

Permaslate is a combination of wood in particleboard form and plastic over top. The smooth plastic is directly under the felt and provides a modicum of protection to the particleboard. Still, when the wood begins to warp (as is nearly unavoidable over a long enough time) the dynamic of the game changes.