If you’ve ever been to a bar with a pool table or a pool hall, you’ve probably seen a rack of pool cues. At a glance, it’s easy to see that they come in a few different sizes. Some are short, some are long, but most of them fall in the middle. These are considered the standard sizes. But who determines what is standard? And who would need a longer or shorter cue? Read on to find out as I explain standard pool cue length.

There are two different standard sizes: 57-inches and 58-inches. 57-inch cues are generally one-piece, meaning they’re one solid piece of wood. 58-inch cues generally come in two pieces with a joint in the middle. You can unscrew these two-piece cues for easy transportation, whereas standard one-piece cues are meant to remain with the table and are often called “house cues.”

What Cue Lengths Are There?

There is a cue length for pretty much everyone. While 57” and 58” cues are the norm, there are shorter and longer cues that come in various sizes.

There are also short bridge cues that measure 24-inches, but they’re not used for regular gameplay. Although they are useful for some hard-to-reach shots, many players have never used a bridge cue at all.

There aren’t nearly as many choices for longer cues, mostly because there isn’t much demand for them. There are only a handful of people in the world who are tall enough to warrant a super-long pool cue. There’s really only one length available for long cues:

However, if you’re willing to pay, you can get a cue custom-made for pretty much any length you want. In fact, the longest usable cue is recorded in the Guinness Book of World Records. Believe it or not, this cue is 17-feet and 7.4 inches long.

Now, my first thought when I heard this was: “That would be impossible to actually use in a pool game unless you were a giant among giants.” But, the man who broke the record, Florian Kohler, demonstrated its efficacy by breaking with the cue and then pocketed 6 balls! With a 17’ 7.4” cue! And he’s no giant, he’s about average size.

There’s nothing standard about that cue. And I’m sure that Florian Kohler doesn’t use it often. After all, he has to be in quite a large room in order to use a cue that size.

The point is, you can get a cue custom made pretty much any size you want. In fact, most tournaments don’t have a maximum size limit on cues. Most of them state that a cue must be at least 40-inches, but that is rarely a cap when it comes to cue length.

For those who like to have their options open, removable cue extensions are ideal. These can be added as needed and removed when you’re done. So if you’re one of those players who only needs a longer cue sometimes, check out one of these cue extensions.

Standard pool cue lengths are all about the common denominator. They have to do with both table size, ball weight, ball size, and the size of the average person. The fact is, for most people, a 58” cue will work just fine. However, people come in all shapes and sizes, so these “standard cues” are not ideal for every player.

As people grow taller on average over time, it wouldn’t surprise me to see the standard cue length grow. Not long ago, the most common cue length was 57-inches. Now it’s 58-inches, with 57 a close second. Maybe it will be 59-inches in another fifty years or so. That being said, let’s talk about who benefits from shorter and longer cues.

Who Needs a Longer or Shorter Cue?

The most common factor for cue length is a person’s height. This is because, in general, the taller a person is, the longer their arms are. And the same can be said about shorter people and the length of their arms. But height isn’t the only factor.

A person of average height that has particularly broad shoulders could benefit from a longer cue. It’s also possible for a short person to have long arms, and a tall person to have short arms.

Also, a person’s shooting stance has a lot to do with their ideal cue length. Granted, a person’s stance or “bridge” depends mostly on their shoulder width, height, and arm length. But it’s possible for an average-sized person to have a long enough bridge that they could benefit from a longer cue, and the opposite is true for those needing a shooter cue.

Of course, kids need shorter cues that are designed for them. As they get older and grow bigger, they can start using larger cues.

So, how do you determine whether or not you need a standard cue? Read on to find out.

How Do You Know What Cue Length is Right for You? 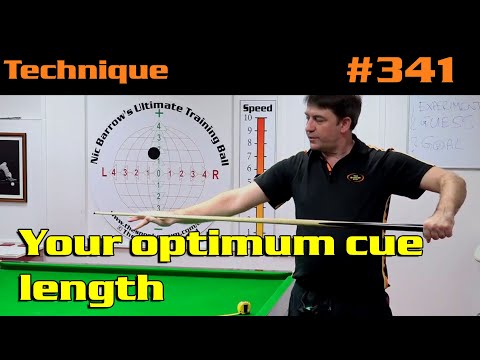 The best cue for you is one that allows you a smooth, controlled stroke. This means that you don’t get in your own way, so to speak. People who shoot with a cue that is too long or short for them generally have to move their body around the cue to take a shot. Ideally, the cue should simply be an extension of your body.

This issue isn’t always apparent to people. Luckily, there’s a way you can get on the right track to proper cue length.

For best results, have a friend take a picture of you in your shooting stance. Here’s what you do:

If you’re holding the cue a few inches from the end, and your forearm is at a 90-degree angle to the cue, you probably have the proper cue length for you.

If you’re holding the cue right at the end of it, or your forearm isn’t at a 90-degree angle to the cue, you may want to try a longer cue.

If you’re holding the cue far up toward the middle of the cue, you should probably try a smaller one.

In summation, standard cue lengths work for most, but they’re definitely not for everyone. The proper cue for you is a matter of comfort, preference, and mechanics.

You want your grip hand to be able to swing through like a pendulum, without having to move your body at all as you shoot. Your forearm and hand should be the only things moving when you take a shot. Your upper arm shouldn’t even move. Think of the elbow as a hinge joint.

So, if you can manage this, and your forearm is lined up at 90-degrees to the cue (or pretty close to it), then you’re in good shape. It also needs to feel comfortable to you. If it feels all wrong, you should probably experiment with other cue length and maybe even different weights, as well.

Are Mini Pool Tables Worth It? A Complete Guide