If you’re like me, you keep an eye out for simple ways to improve your pool game. It’s human nature to want to get better at something. Unfortunately, there’s no magic bullet for getting better at pool. It just takes practice. But there are training balls that can “hack” your practice to make every minute you spend shooting well worth it. And the CutShots Aim Trainer is one of the best for this (if not the best). These balls are specifically designed to make perfecting your cut shots easier than ever before.

What is a Cut Shot in Pool?

If you’ve ever played pool, you’ve attempted a cut shot, even if you didn’t know what it was called at the time. A cut shot is any shot that requires you to hit the object ball off-center with the cue ball so that it moves at an angle. Pool is full of these types of shots, and they can be tricky for most people.

So, say you’re about to win the game. Your opponent still has one more ball on the table before she can go for the 8 ball. But you’re about to shoot the 8 ball for the win. The only problem is that you don’t have a straight shot at the black ball. It’s near a corner pocket, but from where the cue ball is, there’s no straight shot.

You can only do one thing: a cut shot. You need to strike the 8 ball off-center with the cue ball so that you sink the 8 ball while allowing the cue ball to rebound safely off the bumper. This is a cut shot, and pool is full of them.

Why Do You Need to Know How to Do Cut Shots?

As the scenario above illustrates, cut shots are essential to the game of pool. It’s estimated that around 90% of pool shots are cut shots. So, if you master your cut shots, you can increase your skill level quickly.

Plus, mastering cut shots is the foundation for a ton of other shots on the table, like bank shots and combination shots. Knowing where to hit the object ball with the cue ball to make it go where you want is invaluable. It will make you better at most other aspects of playing pool.

Now, you don’t necessarily need training balls to learn cut shots. You can shoot again and again on regular balls, practicing your cut shots. And with enough practice, you’re likely to get good. But if you have a flawed technique, this could take you a long while to figure out.

After all, it’s hard to know that you’re doing something wrong unless you have some way to tell that your aim is off or that you’re hitting the cue ball in the wrong place. This is why developing pool skills from practice alone is often slow and frustrating.

As you can probably guess, this is where the CutShots Aim Trainer 3-step system comes into play.

At first glance, the CutShots Aim Trainer balls (manufactured by Aramith) look like something from a child’s pool set. They’re covered in colorful shapes: squares, triangles, circles, and stars. Unless you really stop to think about it, there’s no obvious way that these balls could help you get better at pool.

But they absolutely can. It’s pretty brilliant, actually (in my opinion, anyway).

The CutShots Aim Trainers are available in sets of different sizes, but you need at least two for them to be effective: one cue ball (white with shapes) and one object ball (yellow with shapes). There’s 112 different shapes on each ball, strategically and consistently placed around the whole ball. These shapes are the key to the CutShots system.

The shapes allow you to choose a spot on the ball easily. Sometimes this spot will be a shape, or sometimes it will be between two shapes. Either way, it makes it much easier for the human eye to keep that spot fixed in their vision, even as you move around to a different angle. This is compared to regular billiard balls that have no spots, making it hard to know where exactly you need to hit them.

But, I’m getting a little bit ahead of myself here. You know why the spots are important. Now let’s look at the 3-step system: Spot, Spot, Shoot.

So, let’s take this simple system step-by-step to show you how it works. You can set these up on a pool table randomly or in the position for a hard cut shot. Either way works.

The first step is to get low behind the yellow object ball. The ball should be in a straight line between you and the center of the pocket. You can either use your eyes alone to line up the shot, or you can use your eyes and your cue. You’ll want to draw an imaginary line between the object ball and the pocket, as if you were to hit it with your cue to make it go in.

That spot where you would hit it with the cue is the spot you want to find on the object ball. Depending on how the ball is positioned, this may be one of the colorful shapes or a spot between shapes. Either way, make that spot as small as possible in your mind. The smaller and more precise you can get with the spot, the more precise your shot will be.

Again, find that corresponding spot on the cue ball. It may be directly on a shape or in between two shapes. This is spot 2.

Line your cue up with spot 2 on the cue ball, but don’t take the shot. If you hit that corresponding spot on the cue ball right where spot 2 is, you’ll miscue. This is because spot 2 is off center, which is exactly where it should be on a cut shot.

Spot 2 is a way to look through the cue ball to spot 1 on the object ball to line up our shot. But it’s not where we want to hit it with the cue. Instead, when you’re ready to shoot, shift your cue over to the center of the cue ball. But make sure you’re shifting the entire cue, keeping it straight as you move it parallel to spot 2 on the cue ball. If you only shift the tip over, then your cue will be at an angle to spot 1 on the object ball and the cue ball will go in that direction instead of straight to spot 1.

So, shift the entire cue over from your line of aim. Since the distance is so small, you won’t have to move your body or anything. You just shift the cue stick over in your hands to the center of the cue ball.

Then, you take the shot! Use a short and firm stroke for best results.

When executed correctly, the cue ball will hit spot 1 on the object ball and you’ll sink it! In fact, their motto is “See The Spots. Sink The Shots!”

Here are two videos explaining how to use CutShots. The first one provides a quick overview while the second goes more in depth. 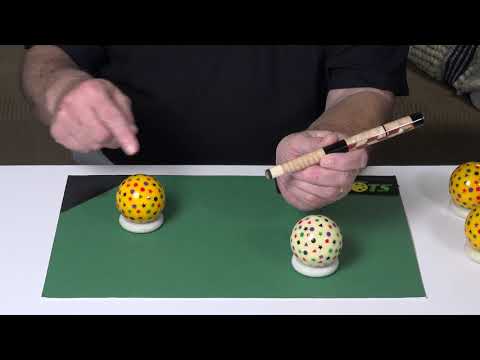 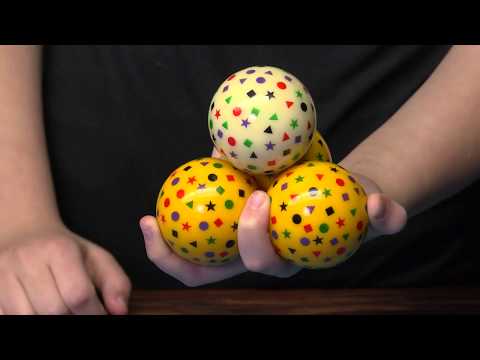 How to Progress From CutShots to Regular Balls

The beautiful thing about the CutShots system is that you’ll develop the habit of spot, spot, shoot. In fact, you see professional pool players do this all the time. They first line up their shot from object ball to pocket, then move behind the cue ball, keeping that spot on the object ball in mind when they take the shot.

So, the more you practice with the CutShots Aim Training balls, the more ingrained the technique will become. Not only will you be able to know where on the object ball you need to hit, but your muscle memory will allow you to make the mechanics of the shots almost automatic.

But, if you ever need a refresher course, you can pull the CutShots balls back out and practice with them again. In fact, those who practice regularly with CutShots balls, using increasingly difficult setups, develop into skilled players faster.

How Are CutShots Different from Other Training Balls?

Plus, most other balls require you to position the ball correctly by hand before every shot to align the diagrams on the ball so you can see them. You don’t have to do this with the CutShots balls. Since they’re covered in the markings, you won’t have to touch the balls before you shoot unless you want to position them for a particular shot.

I kind of glossed over the fact that these balls are made by Aramith. Really, that’s just icing on top of the cake. You know you’re getting a precision set of balls that will last you a long time when the Aramith name is attached. But even if they weren’t made by Aramith, I would still be a big fan. These can help players of any skill level strengthen their cut shots, which is a huge part of the game.

They come in different sets:

To get the most bang for your buck, I’d suggest the 4 ball set with 1 cue ball and 3 object balls.

Or you can always get the 2 ball set and buy 4 object balls later if you want to. All the sets come with a small instruction manual to get you started. No 64-page booklet with these! You can get up and running in no time and you don’t have to study to understand how they work.

If you’d like to check out the CutShots Aim Trainer for yourself, head on over to their website.

Continue Reading
link to Are Olhausen Pool Tables Worth It?

If you’ve done any amount of research on pool tables, you’ve probably come across the name Olhausen at least once. They are one of the biggest pool table manufacturers in the world, with a...