Chalking a Pool Cue: Why Its Done & How To Do It Properly If you’ve played pool for any length of time, no doubt you’ve spent some time chalking the tip of your pool cue. After all, everyone else in the pool hall is doing it and so are the guys on TV. But if you’re new to the game of pool you may have a few questions about chalking up and why its important. One of the first ones being, “Why do you chalk a pool cue?”

That’s the short answer. If you’d like to know more about the how’s and why’s of chalking up, keep reading to learn more. In this article we’re going to share with you everything you need to know about chalking a pool cue.

Why It’s Important To Chalk Your Cue

Chalking up is essential to the game of pool. There’s a reason you see the pros chalk up before every shot.

The main reason for chalking up, as mentioned above, is to add friction to the tip of your cue. Without this friction, miscues would run rampant and the game of pool would be a lot harder to play and enjoy. Miscues occur any time you strike the cue ball too far off center. This results in the cue ball deflecting off your cue with very little energy or accuracy instead of traveling straight ahead toward your desired target.

As you can imagine, and have probably experienced yourself, miscues are quite annoying. By taking the time to chalk your cue before every shot, you can drastically reduce the chance of miscuing. As long as you’ve practiced enough to hit the center of the cue ball, that is.

The more friction you have between the tip of your cue and the cue ball, the less chance you have of miscuing. This also means you have better control of the cue ball when using English. If you play with a lot of English, you know how important it is to make contact with the cue ball exactly where you want it.

Another factor to consider is that pool balls are perfectly round and highly polished. Trying to hit them accurately with a narrow pool cue is hard enough as it is. Add to that the level of concentration it takes to make tough shots and you can see why you need the extra benefit that chalk has to offer.

In summary, chalk helps you make better contact with the cue ball. This, in theory, should help improve your accuracy and as a result, become a better pool player.

How to Chalk Up Properly

Most of the chalk you see in the pool hall looks like its had a drill taken to it. Unfortunately, this is the result of improper chalking. Spinning the cube of chalk endlessly on the tip of your cue is not the right way to do it. Don’t get me wrong, you still end up with a chalked cue but there’s a better, more appropriate way of doing it.

To chalk your cue properly you should brush the cube of chalk across the tip of your cue, lightly and evenly. Think of it as applying the first layer of paint on a wall. You want complete coverage, but not so much that you have runs in the paint. Be sure to chalk the face and sides of your tip. You want to be sure you have chalk on any surface that could come in contact with the cue ball.

Chalking your cue this way will help ensure complete, even coverage whereas rounding the chalk cube violently against your tip is sure to leave it heavy in some areas and light in others.

Another thing to keep in mind is the tip itself. If you have a soft tip it will hold more chalk. Hard tips on the other hand do not hold chalk as well and may require a bit more at each application.

If you’d like to see how to chalk your cue appropriately, check out this short video below. 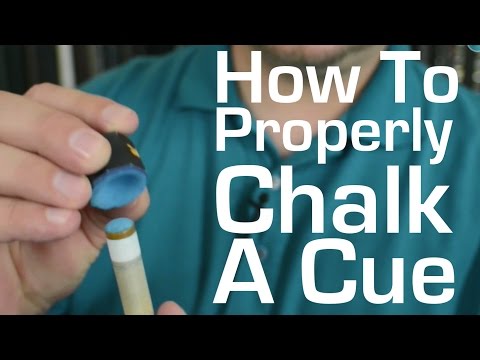 How Often Should I Chalk Up

Most players will agree that its a good idea to chalk up before every shot. Doing so is the only way to ensure that your chances of miscues will be minimal. If you’re next shot requires the use of English, you’ll definitely want to chalk up. No need to take an unnecessary chance of miscuing.

Some players would argue that chalking up before every shot is unnecessary. The argument here is that most tips that are in good shape will hold chalk for more than one shot. There is definitely some truth to that argument. If you’re playing with a soft or medium tip that’s in good shape, its probably fine to skip a few shots without chalk. Thats obviously a complete judgement call on your part.

What Kind of Chalk Should I Use?

There are lots of different brands of chalk on the market. You can find chalk for as little as $7 bucks for a 12 pack and as high as, if not higher than, $35 bucks per cube. When it comes to chalk however, its highly personal preference. Its one of those things you have to experiment with and see what feels and works best for you.

Another great brand of pool cue chalk is Predator. The same company that produces those awesome cues you’ve been eyeballing also has their own line of chalk. Their claim is that their chalk improves accuracy, has better consistency, increases spin, and has a longer on-tip chalk life. For a little under $15 bucks you can get a 5 pack of Predator Chalk with a chalk holder on Amazon. Definitely worth looking into if you want a top notch chalk at an affordable price.

On the high end of the spectrum you have Kamui. Kamui chalk is a premier chalk and typically isn’t used much by beginners due to its price. Coming in at roughly $35 per cube, you can see why most new players shy away from it. Some more experienced players, however, swear by Kamui chalk. Some users have even reported only using one cube per year while playing on average 15 hours a week! If you want to see what all the hype is about, you can get your hands on a piece of Kamui chalk here.

If you’re new to the game of pool, you may want to familiarize yourself with proper chalking etiquette. Here are a few things you should know before reaching for the cube.

I hope by now you have a pretty good understanding of why its important to chalk your pool cue and how to do it properly. If you follow the simple instructions above you’ll do just fine. Also, be sure to use proper chalking etiquette. You’ll save yourself a bit of embarrassment from other more experienced players and the table owner will appreciate it.

If you have any other questions about billiards, feel free to check out our other super helpful articles just like this one. Thanks for reading!

7 of The Best Affordable Pool Cues

How to Play Pool: The Beginners Guide