Can You Play Pool Without Chalk? If you play pool as much as I do, you’ve probably found yourself at a bar or a friend’s house with a cue in hand, searching everywhere for a little cube of chalk. Cue chalk seems to be like a sock in the dryer; it disappears without a trace. If you can’t find any chalk around, you may be wondering, can you play pool without chalk?

It’s possible to play pool without chalk, it’s just not a great idea. Chalk provides friction between the smooth cue tip and the smooth cue ball. Without this friction, you’re more likely to miscue. It won’t damage your cue tip or the ball to play without chalk. But it probably won’t be your best game, either.

Chalk is the unsung hero of the game of pool. You don’t really notice how important it is until you have to shoot without it. And if you take a look at the cue tip and the cue ball, you’ll notice why.

Cue balls are made with an extremely hard phenolic resin. They’re designed to roll smoothly across the felt and to maintain their shape for many years, even as they’re smashed against other balls repeatedly during the game.

If you pick up a cue ball and look closely at it, you’ll see how smooth it is.

Cue tips, on the other hand, are not quite as hard as cue balls. The only exception to this is the tips of some break cues, which are made out of the same phenolic resin. All other quality cue tips are made out of leather or pigskin, generally.

While it’s true you can purchase cue tips of different hardness, even the soft ones only have so much give. Essentially, a standard leather cue tip needs to be hard enough to both impart velocity onto the cue ball and to stand up to the repeated pounding it gets during play.

So if you take a look at your cue tip, you’ll notice that it’s hard to the touch, smooth, and slightly rounded, as well.

As you can imagine, two hard, rounded surfaces meeting each other without the friction provided by chalk can throw accuracy out the window.

Without chalk, you’re more likely to miscue. Chances are you’ve miscues once or twice in your pool-playing career. Everyone does at one time or another.

It happens when you hit the ball off-center, causing the ball to veer off in the wrong direction, or to simply roll ineffectually a few inches while the unmistakable sound of the miscue rings in your ears.

And pool is not golf. You don’t get a mulligan when you miscue, whether you have chalk or not. That’s your turn. Next player up.

When playing at a certain level, one single miscue can cost you a game, easily. For novice players, two miscues can spell disaster.

And it’s not just a lack of chalk that causes these incidents. They can happen when your cue is chalked, too. This is one of the reasons why pool is a skill-sport. 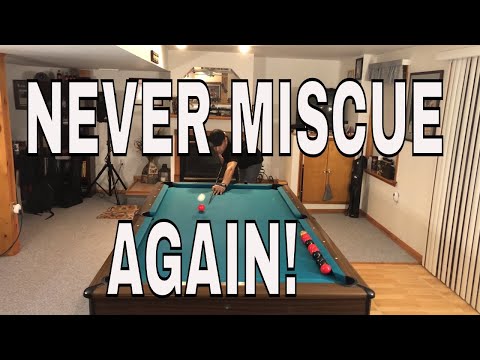 Chalk Is Essential for English

The flip side to preventing miscues with chalk is putting spin or “English” on the ball. While this may not be essential to novice players, it’s impossible to join the ranks of great (or even good) pool players without mastering English.

Anything but a straight shot requires some amount of English. And how you get this spin on the cue ball is by hitting it off-center. If you take chalk out of the equation, it’s very, very difficult to hit a ball off-center and not miscue. At the very least, your accuracy suffers and the ball doesn’t end up where you need it.

Other shots require enough English to send the ball curving around the table or to send the cue ball spinning back so you can line up your next shot.

Without chalk, these shots become so difficult they often aren’t even worth attempting.

But, luckily, there are some things you can do in a pinch to add some much-needed friction to your cue tip.

Things to Do if You Don’t Have Chalk

None of the things below are quite as good as pool chalk, but they’re usually better than nothing.

Look around the establishment for a scoreboard that requires chalk. Often places with darts or other bar games have these types of blackboards. Snag a piece of regular chalk and use that on your cue tip instead. It works well in a pinch.

This may sound strange, but it works better than nothing. If you frequent hole-in-the-wall bars, you may be able to find a hole in the drywall. I do not suggest putting a hole there yourself unless you want to pay to have it repaired. But, if you get lucky and find some crumbling drywall, snag a piece of the chalky substance and use that on your cue tip.

Yes, this one is strange, too. Chalk this one up to the internet (get it? Chalk?!). People get creative when they want to play some pool, and so a very little bit of lipstick and some dirt on top can provide some friction. Just know that it may stain the table!

Although a little smelly and not nearly as good as legit chalk, some players have been known to use cigarette ash as their cue chalk. It’s (slightly) better than nothing.

If you have a scuffer handy, you can use that to score or scuff the tip. These are usually used to help the cue tip hold chalk better, but they can work without chalk if you’re desperate.

Get a Chalkless Cue Tip

Chalkless cue tips are designed for use without chalk. Some people love them, but the majority of the pool world still uses traditional tips with chalk. You may try one and see how you like it. It can definitely be helpful if you don’t have chalk.

Be a Straight Shooter

The last option on our list is to shoot straight. Only choose dead-center shots, making use of bank shots and surely prolonging the game. But, this can be a great learning experience. It can make you a better player if you practice only straight shots for long enough. You’ll still want to use chalk in the future, but it pays to know every aspect of the game.

You can play pool without chalk, but would you really want to? The best solution to this problem is to never be without chalk again. There’s a couple of ways to do that:

I hope you enjoyed this article. May you never be chalkless again!

How to Hold a Pool Cue: A Simple Guide for Beginners

Should You Wax Pool Balls?